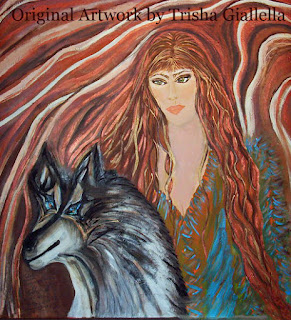 I think this is what drowning feels like.  I lost a friend yesterday.  And I'm afraid that I am just having a very hard time finding the words to express what the world lost.  I'm having a hard time KNOWING she's gone.  I just can't believe that Trisha Giallella died yesterday.

I've known Trish for a large chunk of my life; she was the sister of my sister's ex husband. But for all the years that I knew her, I never REALLY knew her until very recently.  Oh sure, over the years I would listen in awe at all her stories.... stories of making movies in Hollywood, the wild parties and dating Rick James.  To a young girl of 15, those stories seemed like something from TV itself and far removed from my own piddly little life.  The fact that she even shared her stories with me sent me into a stuper.  I always had stars in my eyes when I listened to Trish talk, she was so glamorous and very, very tough... very passionate and good at "living".  It wasn't until years later, after she moved back to Arizona to live, had been in a severe accident and was well on her way to "settling down" did I really get to know her... and, of course, I had grown.  Our first heart to heart was when she and I rode together to a Joel Osteen conference in downtown Phoenix back in 2009.  I began to see the real person behind the incredible stories.  She and I had SO MUCH in common, but I won't lie, I still saw stars when I talked to her.  And then when my own sister and I had a falling out about a year ago, Trish became a nurturing force that filled a pretty big void for me.  Trish made it a point to call me regularly to check on me, we chatted a few times a month and messaged each other on Twitter and Facebook.  I saw very quickly that she had an incredible way of letting you know she cared.  I will always be grateful for her and my heart is truly breaking for the loss of more than just a friend, but for a new-found sister that I was only beginning to gain.

I spoke to Trish three days ago.  I keep replaying that conversation in my head.... each time adding to it things I wish I could say to her now.  We joked that day that she thrived on strife; I had no way of guessing how poignant that statement might be.  Right now, I don't have any information on how Trish died (WHY?  That's weird that no one knows yet).... I really wish I did.  But what I do know is that God is very happy to have her back with Him.  As entertaining as she was here on Earth.... I know she's a MILLION times more now that she's free.  Thank you God.  Thank you for giving me an opportunity to get to know Trish, even just a little.... I wish I could have had her longer.

*** I also have a quick note for Facebook.  THANK YOU!!!  Because of Facebook, I can review all of our conversations clear back to 2010.  Now that she's gone, I'm so glad I have those to read.... even though these conversations that I so took for granted are breaking my heart.  I'm also grateful that my posts for the week are already done and scheduled to go live because I honestly might need to step away from the computer for awhile.  Please keep me in your prayers as I work through understanding she's gone.  RIP Trish.
Posted by FitterTwit at 5:00 AM

Email ThisBlogThis!Share to TwitterShare to FacebookShare to Pinterest
Labels: relationships

So sorry my friend for your loss... my heart breaks for you.....

So sorry to hear of your friend's passing. I send my condolences. May your heavy heart be filled with everlasting memories.

Rest in peace Trish. I am so sorry that you lost such a wonderful friend, I am praying for all of Trish's friends and family. She is now an angel watching over you. (((HUGS)))

It shows how unexpected life can be & you should mend the relationship with your sister!

This shows how unexpected life can be. You should mend the relationship with your sister.

Thank you Kfergy... but that one is out of my hands.

Once again, I thank you for sharing this & confirming my suspicions about Trisha. She always awed & dazzled. I am blessed to have even had the small glimpses that I did.

My friend, I am so sorry about the loss of your dear friend. My prayers are with you and her family that you heal soon as she's already happy and in a place where she will find rest, and can look over you all -- smiling!

My sincerest condolences on the loss of Trisha. I recently learned of her death this past weekend from her current husband, whom I have known for 16 years.
Trisha was a client of mine at the veterinary practice I managed. She brought in her many dogs as well as her mom's. She took care of everyone and her animals always received the upmost care. Now its her turn to be cherished and loved by her creator. May her memories live on and her spirit never fade.