Gay Marriage... Christian Divorce.... What If? 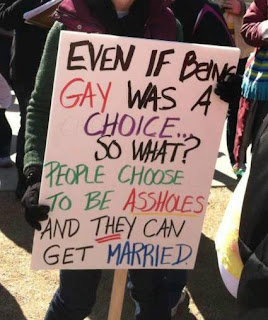 So this post is inspired by the pic above.  It was posted by one of my facebook friends and my response was, "um.... good point!"  And that led to me thinking about WHAT is marriage?  Well, I am a Christian and my Christian friends would say that marriage is a holy and divinely established covenant.  That the "holy" and "divinely" would exclude gay people from marriage based on the whole "and when a man lies down with a male the same as one lies with a woman, both of them have committed an abomination...Lev. 20:13" keeping the union from being classified as :"divinely ordered".  But then, couldn't the same be held true for divorce?  Why are Christians allowed to divorce?  Doesn't the Bible also say, “So they are no longer two but one flesh.  What therefore God has joined together, let not man separate . . . And I say to you:  whoever divorces his wife, except for sexual immorality, and marries another, commits adultery” (Matthew 19:6, 9).

Ok, so let's take a quick peek at adultery.  Exodus 20:14:  "You shall not commit adultery."  There you have it... number 7 on the list of the 10 commandments, the foundation of my Christian faith "you shall not commit adultery."  Welp, according to Divorcerate.org, 50% percent of first marriages, 67% of second and 74% of third marriages end in divorce and USA Today chimed in with an article about Christians and divorce; according to National Opinion Research Center at the University of Chicago, apparently the Christian-specific divorce rate is running at a whopping 42%.  They also researched how church attendance effected statistics.  My point here, PLENTY of people choose not to live Godly lives and are allowed to be married.  Heck, even people who espouse living Godly lives still choose to commit sins.  I personally don't believe that a union that is recognized by our government does ANYTHING to undermine the unions that I believe are ordained and appointed by God.... when they truly ARE appointed by God.  I myself have been divorced and while sexual immorality played a HUGE roll in the ending of my union (yes, my ex husband cheated on me), I can also attest that I don't believe God ordered the union in the first place.  So didn't I sin?  And that leads to my belief in free will.  I also believe that God gave us all free will and our fight to keep gays from marrying goes against the very essence of the free gift God gave us ALL.  Who are we to dictate that sin, ANY OF OUR SIN should take away what God gave us?  Personally my faith transcends anything worldly... INCLUDING gay marriage.  A gay couple marrying does not waiver my faith or God's power in the slightest.  In fact, Christian divorce does more to hurt my faith than gay marriage ever could.

That is all folks.... just my thoughts for today.  My thoughts are not meant to offend any of my Christian family.  My only wish is that we all consider right and wrong with respect for one another.  Do I believe that being gay is a sin.  Yep... I sure do.  But what do I really know?  Do I believe that sin is worse than anything I've ever done.... NOPE!!!  But I know I would NEVER want my church family to condemn me for my sins just as I hate that gay people are so condemned.  Because they are gay, the church decided that they are not allowed to be legally joined... to receive certain benefits that the rest of us get...that sounds exactly like condemnation!   What are Christians really showing the world?  Is that really God's love, or our judgement?  Are we really allowing God to be in control or are we trying to take matters into our own hands?  How did Christians feel when Jesus was crucified and murdered?  What if we would have stopped that ultimate sin of Jesus' murder (commandment #6 for those who do not know, "Thou Shall Not Murder")?  How would anyone be redeemed?  What if what we are trying to stop is something that will enrich the world?  To end this abruptly and rather awkwardly, I'm really just saying please consider "What If?"

Progress... Well, After The Fact 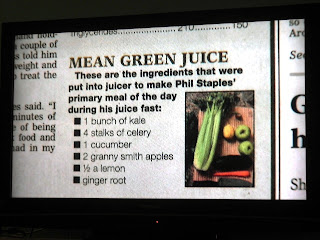 My cleanse ended YESTERDAY!!!  I officially made it 15 days on the juice cleanse.  Here's my take-away:

Pros
Cons
So yes, this fast was a HUGE success.  I will definitely be giving this one another try toward the end of summer.  I'm excited to see what happens between now and then.  The true test of a cleanse is not what happens during, but rather what happens after its over.  And over the years I've always noticed "something new" about my body after each cleanse was done.  I'm anxious to see what happens now that the juice fast is over.  One big change I'm committed to is that I am going to continue to juice every evening before bed.  The energy I had on this cleanse HAS GOT to do with the fact that the body is receiving so many vitamins and minerals.  Each glass of juice contained a minimum of 3 servings of fruit/vegetables in each glass.  And it isn't the processed crap that you get at the store.  This is straight from the living food right to your system in liquid form and IMMEDIATELY absorbed.  That right there blew me away the ENTIRE TIME I was on the fast.  I kept waiting for the day that I'd feel tired or run down and the day never came.  Needless to say, I am THRILLED with juice fasting, and compared to The Master Cleanse (while I recommend BOTH... with your doctor's supervision of course), I HIGHLY recommend juice fasting and give it 1000 high fives!!!!
at March 17, 2013 1 comment: 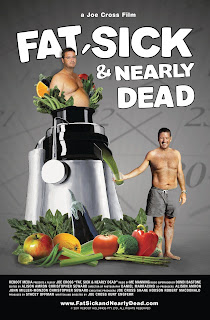 Ok you guys... I just saw Fat, Sick and Nearly Dead!  WOW!!!  THIS is the fast I'm doing this year!!!  In the past, I've always done The Master Cleanse, but after watching this movie... I'm ALL OVER giving this fast a try.  I LOOKS DELICIOUS!!!  Instead of daily salt water flushes and choking down the lemon/maple syrup/cayenne concoction (which I won't lie, I personally enjoyed but had heard COUNTLESS complaints) I am going to be undertaking 20 days of fresh vegetable and fruit juices.... only fresh vegetable and fruit juices.... starting tomorrow. The movie made the fast seem very doable and the juices they consumed looked yummy so I'm hoping I won't suffer the INTENSE feeling of hunger I alway have to go through the first few days of The Master Cleanse.  They did mention that you don't feel very good the first few days of this juice fast because of detox symptoms, but I'm hoping that because I fast pretty regularly, I won't have the same issue.  Although, I DID miss fasting last year entirely, so you never know.  Yep... it's that time again.  Time to get my fast on.  I'm planning on swinging by here and posting my progress.  I'm hopeful this will be easy and fun.  And if anyone out there is looking for some weight loss inspiration... I HIGHLY recommend Fat, Sick and Nearly Dead.  That documentary was AMAZING!!!  I give it 50 high fives!!!
at March 10, 2013 2 comments: 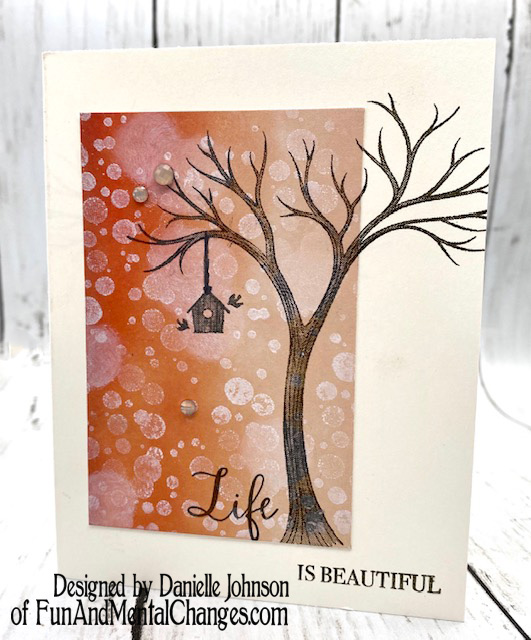